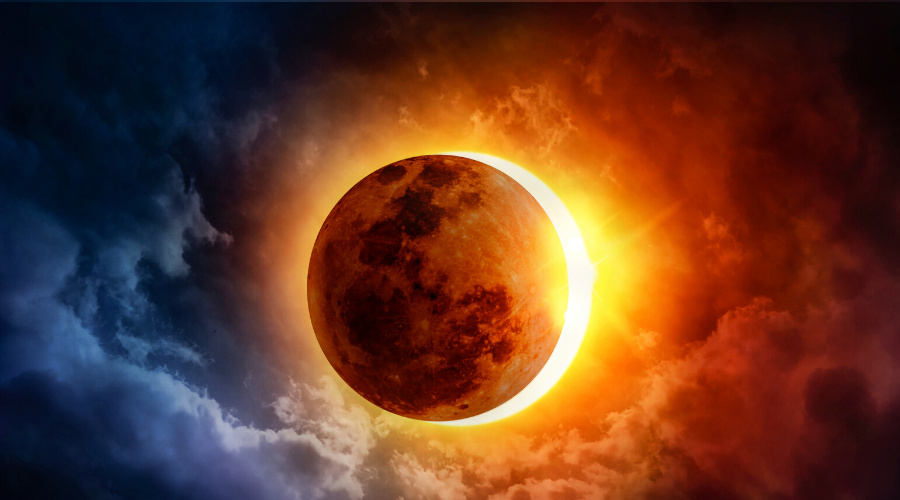 The annular solar eclipse of 25 December 2019 takes place at 4° Capricorn 06′ and timeanddate.com says that it will be visible as least partially in “East in Europe, Much of Asia, North/West Australia, East in Africa, Pacific, Indian Ocean”.

Solar eclipses occur on New Moons. New Moons are traditionally a time for sowing seeds and are a good time for breaking old habits and taking up new routines.

A solar eclipse amplifies the power of the New Moon and may bring sudden change, or bring a situation to light. Solar eclipses tend to be associated with beginnings and with external events happening to you.

Unless you have natal or secondary progressed planets at zodiac degrees in close aspect to the eclipse degree (4° Capricorn 06′), you are unlikely to feel the impact of this eclipse too much, if at all.

The Sabian Symbol for the eclipse degree is 5° Capricorn – “Indians on the warpath, while some row a well-filled canoe, others in it perform a war dance”.

Links to past Eclipses

This solar eclipse belongs to Saros Series 3 South and is also known as Saros 132. This series started in 1208 and will run until 2452.

Bernadette Brady in her book Predictive Astrology – The Eagle and the Lark says that this Saros Series tends to have the effect of causing the “sudden ending of associations or of a relationship, possibly with a younger person.” She notes that as Pluto is involved in these eclipses saros series that there is usually strong emotional component and that there may be themes of transformation involved.

Some Eclipses in 3 South include:

Landscape Around the Eclipse

This season of Capricorn/Cancer eclipses started with a solar eclipse on 12 July 2018 and will end with a lunar eclipse on 4 July 2020.

The Sun/Moon conjunction (New Moon/Eclipse) is conjunct Jupiter in Capricorn, which is  just over 1° ahead of the eclipse degree. Jupiter is associated with enthusiasm, optimism and expansion but these qualities might be a little more subdued in the sign of Capricorn.

The eclipse degree is trine (a helpful aspect) Uranus at 2° Taurus. This is notable because Jupiter and Uranus have just moved out of a trine to each other (December 11th to 20th, 2019). It will be interesting to see if the enthusiasm and innovative ideas that were being generated at that time get some boost from this solar eclipse.

Pluto is in the same sign as the eclipse, but over 16 degrees away. The upcoming lunar eclipse of January 10th, 2020 will have its eclipse degree conjunct Mercury; and very close to the Saturn (structures) Pluto (transformation) conjunction.

As lunar eclipses are often associated with endings, it may signify the end of an era in some ways. Perhaps new beginnings formulated around the time of this eclipse will result in the tearing down and rebuilding theme that seems indicated in the upcoming lunar eclipse.

The lunar eclipse that closes the current Capricorn/Cancer eclipses in July 2020 will have Mars at Aries at 4° which is square the degree of this eclipse. Mars transits can often act as triggers, and as this is occurring on another eclipse, and an eclipse that closes out the current Capricorn/Cancer eclipses, it might be quite memorable.

Mars will be a few weeks from entering its shadow for its upcoming retrograde at that time. The shadow period will not end until early 2021. Whatever beginnings and endings this series of eclipses might usher in, seem to be stalled for a lot of 2020. It will take hard work and patience to achieve results with Mars (energy) stymied for a lot of 2020. With Saturn ruling Capricorn, it is not surprising that there might be no reward without hard work and persistence.

Those that have natal or secondary progressed planets at 3° to 5° of Capricorn and Cancer are likely to feel the effects of this eclipse more than others as they conjunct and oppose the eclipse degree.

Those with natal or secondary progressed planets at 3° to 5° of Aries and Libra may feel the impact quite significantly too.  These positions will be squaring the eclipse degree.

Conjunctions, squares, and oppositions are often thought to be difficult aspects. As Capricorn, Cancer, Aries and Libra are cardinal signs, making the initial changes may not be so difficult. Actually persisting with the work needed to effect real change may prove more challenging.

If the natal or secondary progressed planets being squared are Venus or Jupiter, the changes or what comes to light may be more positive, although may not have a long life-span. Difficult aspects to Mars and Saturn may tend more towards disgrace or ruin.

Those with natal or secondary progressed planets at  3° to 5° of Scorpio, Pisces, Virgo and Taurus feel some impact of the eclipse, as these positions are sextile and trine the eclipse degree. Sextiles and trines are helpful and easy aspects so potentially any changes will be easier to cope with.

Those with natal or secondary progressed planets at  3° to 5° of Leo and Gemini may also find that they feel some impact of the eclipse. These positions are quincunx the eclipse degree and quincunxes often ask us to make adjustments of some kind.

If you have a natal planet at 3°  to 5° of any sign, the times that that planet crosses over your angles (Ascendant, Descendant, IC or MidHeaven) may bring significant news or events in relation to this eclipse.