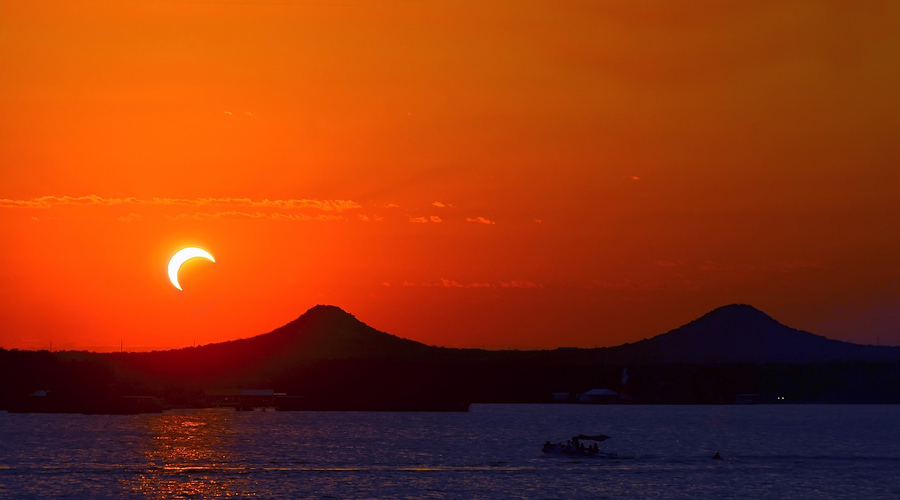 The partial solar eclipse of 11 August 2018 takes place at 18° Leo 41′ and timeanddate.com says that it will be “visible from northern and eastern Europe, northern parts of North America, and some northern and western locations in Asia”.

Solar eclipses occur on New Moons. New Moons are traditionally a time for sowing seeds and are a good time for breaking old habits and taking up new routines.

A solar eclipse amplifies the power of the New Moon and may bring sudden change, or bring a situation to light. Solar eclipses tend to be associated with beginnings and with external events happening to you.

Unless you have natal or secondary progressed planets at zodiac degrees in close aspect to the eclipse degree (18° Leo 41′), you are unlikely to feel the impact of this eclipse too much, if at all.

The Sabian Symbol for the eclipse degree is 19° Leo – A houseboat party crowded with revelers; the water reflects its lights

Another interpretation – A houseboat party.

Links to past Eclipses

This solar eclipse belongs to Saros Series 2 New North and is also known as Saros 155. This series started in 1928 and will run until 3190.

Bernadette Brady in her book Predictive Astrology – The Eagle and the Lark says that this Saros Series tends to have the effect of causing the “sudden collapse of plans or lifestyles”. While this can be quite devastating at the time, this gives the chance to rebuild and reshape the situation going forward. The outcome of this rebuilding can have “far-reaching effects” and cause a change of direction. It all sounds very Plutonic to me.

Some Eclipses in 2 New North include:

The Sun/Moon conjunction (New Moon/Eclipse)  is in a quincunx aspect to Pluto. Quincunxes often ask us to make some sort of adjustment. As eclipses are often harbingers of change, these changes may be powerful and perhaps even scary.

Pluto has a fearsome reputation for making us go way down deep to expose the darkest parts before rebuilding and this matches up with the description quoted in the Saros series section above.

Retrograde Mercury is widely conjunct the Sun and Moon conjunction (New Moon) at the time of the eclipse but with 4° between the Sun/Moon and Mercury though, this may not be felt too strongly.

Retrograde Mercury is very close to an exact square to Jupiter. With Jupiter’s tendency to go way over the top at times, mixed with the retrograde nature of Mercury at the moment, there may be a tendency for disinformation and a lot of hyperbole.

Mercury is also in a close quincunx aspect to Neptune. Neptune’s influence can make things, slippery, elusive, and sometimes even deceptive. Added to the Jupiter square, I would not be taking anything at face value, and not believe everything you hear. If it sounds too good to be true, then it probably is.

Those that have natal or secondary progressed planets at 17° to 19° of Leo and Aquarius are likely to feel the effects of this eclipse more than others as they conjunct and oppose the eclipse degree.

Those with natal or secondary progressed planets at 17° to 19° of Taurus and Scorpio may feel the impact quite significantly too.  These positions will be squaring the eclipse degree.

Conjunctions, squares, and oppositions are often thought to be difficult aspects, and as Aquarius, Leo, Taurus, and Scorpio are fixed signs, any change may be quite upsetting. If the natal or secondary progressed planets being squared are Venus or Jupiter, the changes or what comes to light may be more positive, although may not have a long life-span. Difficult aspects to Mars and Saturn may tend more towards disgrace or ruin.

Those with natal or secondary progressed planets at  17° to 19° of Aries, Libra, Sagittarius, and Gemini may feel some impact of the eclipse, as these positions are sextile and trine the eclipse degree. Sextiles and trines are helpful and easy aspects so potentially any changes will be easier to cope with.

Those with natal or secondary progressed planets at  17° to 19° of Pisces and Capricorn may find that they feel some impact of the eclipse. These positions are quincunx the eclipse degree and quincunxes often ask us to make adjustments of some kind.

If you had a natal planet at 17°  to 19° of any sign, the times that that planet crosses over your angles (Ascendant, Descendant, IC or MidHeaven) may bring significant news or events.