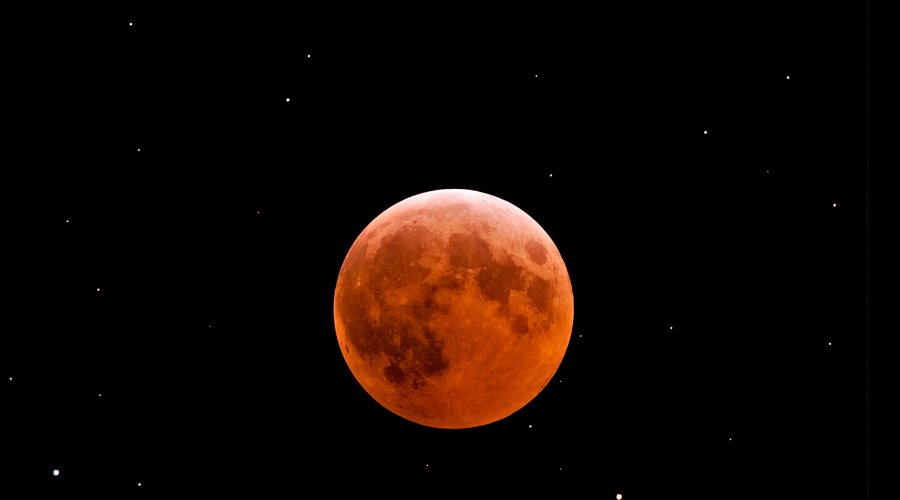 The total lunar eclipse of 20 January 2019 will be visible to those in North and South America, Europe, and western Africa.

Lunar eclipses occur on Full Moons. Full Moons are traditionally associated with times of harvest. It is a time for reaping what you have sown in previous New Moon periods.

A lunar eclipse amplifies the power of the Full Moon and may bring about sudden changes or reveal something that has been hidden. Lunar eclipses tend to be associated with endings but these endings may be more about changes within ourselves than in more outward events or circumstances happen to/around us.

The Sabian Symbol for the eclipse degree is 1° Leo – “Under emotional stress, blood rushes to a person’s head”. Given that Full Moons/Lunar Eclipses tend to be more emotional than the New Moons/Solar Eclipses, there may be some high emotions involved. 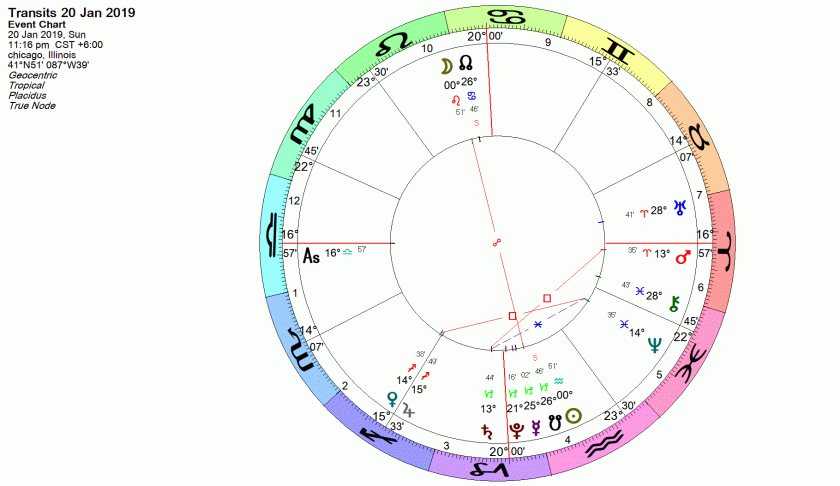 For the total lunar eclipse of 20 January  2019 (Central Standard Time CST) there are many other planets that are impacting the chart.

The Moon (0°51′  Leo) opposes the Sun (0°51′ Leo) which forms the basis of the new moon lunar eclipse. The Sun and Moon are exactly opposite each side of the earth so this is a total lunar eclipse.

The Moon is moving away from a square to Uranus at 28° Aries at the time of the eclipse. Uranus has stationed direct and moving in forward motion, after being retrograde for some months. Uranus is known for being shocking and unexpected at times, so this may have some bearing on things that come to light during this time.

Neptune, a planet which is associated with idealism, romance and which can sometimes be deceptive is also all over this eclipse. Venus (values/affection) in the freedom loving sign of Sagittarius will have recently squared (challenging) Neptune.

Venus will be conjunct Jupiter (expansion, generosity and philosophy) so blending Venus and Jupiter together. This may mean though that any reactions from Venus squaring Neptune may be amplified as Jupiter does tend to expand and enlarge events.

Saturn, the planet of discipline, endurance and patience, in its own sign of Capricorn is coming up to be squared (challenging) by Mars, the planet of energy, ambiton, anger, also in its own sign, Aries. There may be a real pull of wanting to move forward and feeling held back. As both of these planets are in the own “home” this should be a little more manageable.

What may be a saving grace in some of this is that Saturn will be coming up to sextile (helpful) Neptune. Saturn will not reach the exact degree to sextile Neptune until the end of the month. Whatever the fall out may be for some people with this Lunar Eclipse may reach some positive development at that time.

With so much Neptune influence around, it may pay to not believe everything you hear (good and bad) around the time of the eclipse. Secrets may come out, some may be falsehoods, some may have a lot more depth than at first glance.

Those that have natal or secondary progressed planets at 0° to 1° of Aquarius and Leo are likely to feel the effects of this eclipse more than others they conjunct and oppose the eclipse degree.

Those with natal or secondary progressed planets at 0° to 1° of Taurus and Scorpio may feel the impact quite significantly too.  These positions will be squaring the eclipse degree.

Squares and oppositions are often thought to be difficult aspects, and as Aquarius, Leo, Taurus, and Scorpio are fixed signs, any change may be quite challenging for those involved.

If the natal or secondary progressed planets being squared are Venus or Jupiter, the changes or what comes to light may be more positive, although it may not have a long life-span. Difficult aspects to Mars and Saturn may bring disgrace or ruin.

Those with natal or secondary progressed planets at  0° to 1° of Aries, Libra, Sagittarius, and Gemini may feel some impact of the eclipse, as these positions are sextile and trine the eclipse degree. Sextile and trine aspects are helpful and easy aspects so potentially any changes will likely be more advantageous.

Those with natal or secondary progressed planets at  0° to 1° of Pisces and Capricorn may find that they feel some impact of the eclipse. These positions are quincunx the eclipse degree and quincunxes often ask us to make adjustments of some kind.

If you have a natal planet at 0° to 1° of any sign, paying attention to when that planet crossed over your angles (Ascendant, Descendant, IC or MidHeaven) may bring significant news or events.

Shortly afterward, Saturn will retrograde over the degree angle (0° Aquarius) again at 17 June 2020 and then later move over it once more in direct motion on the 24th December 2020.