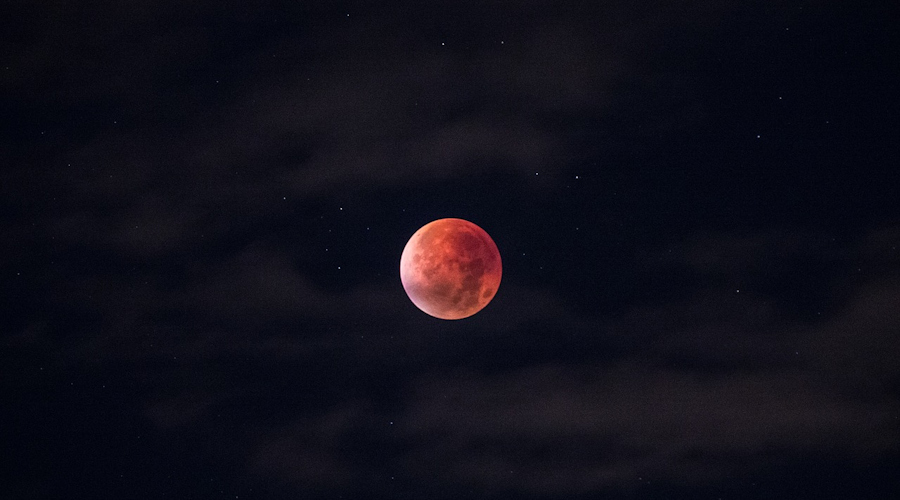 The total lunar eclipse of 27 July 2018 will be the longest one of the 21st century.

Lunar eclipses occur on Full Moons. Full Moons are traditionally a time of harvest. It is a time for reaping what you have sown in previous New Moon periods.

A lunar eclipse amplifies the power of the Full Moon and may bring sudden change or bring something that has been hidden out in the open. Lunar eclipses tend to be associated with endings, more emotional and focused on change from within.

The Sabian Symbol for the eclipse degree is 5° Aquarius – A council of ancestors have been called to guide a man.

For the total lunar eclipse of 27 July 2018 (Central Standard Time CST) there are many other planets that are impacting the chart.

The Moon (4°44′  Aquarius) opposes the Sun (4°44′ Leo) which forms the basis of the new moon lunar eclipse. The Sun and Moon are exactly opposite each side of the earth so this is a total lunar eclipse.

Mars is an excitable and impatient planet. It is currently retrograde so a lot of that energy is internalized at the moment and full moons tend to be about internalized energy as well. Mars does make a semi-sextile to retrograde Saturn at the time of the eclipse, so this may help keep Mars from acting up too much.

Uranus, a planet known for its unpredictability and sometimes shocking actions is at 2°30′ Taurus. This puts Uranus in a wide square to retrograde Mars (3°58′ Aquarius) and the Moon (4°44′  Aquarius) as well as the Sun (4°44′ Leo).

This forms a t-square pattern with Uranus as the focal point. As eclipses often bring change and Uranus is known for upsetting the apple cart at times, some of us may be in for a very bumpy ride.

Square aspects are challenging and often ask us to make adjustments of some kind. Uranus has not long entered the sign of Taurus (a fixed sign that doesn’t enjoy change). What may be the saving grace is that retrograde Saturn makes a trine to Uranus at the time of the eclipse.

Mercury has only just turned retrograde a day before the eclipse at 23° Leo. Mercury retrograde periods are often times of mix-ups and miscommunications. Machinery breaks down, systems fail and it is not usually a good time to start something new. It is good for reviewing and going over old ground though.

Joining Mercury, we have Mars, Saturn, Neptune, and Pluto all currently retrograde. Retrograde planets tend to internalize their energies and can highlight areas where we feel stuck, unsure or unsettled.

Jupiter was retrograde up until July 11th (just prior to the previous partial solar eclipse at 20° Cancer). While Jupiter is now in direct motion, it is still in the same degree that it was when it stationed direct.

Venus forms a trine to retrograde Pluto at the time of the eclipse.

Those that have natal or secondary progressed planets at 3° to 5° of Aquarius and Leo are likely to feel the effects of this eclipse more than others they conjunct and oppose the eclipse degree.

Those with natal or secondary progressed planets at 3° to 5° of Taurus and Scorpio may feel the impact quite significantly too.  These positions will be squaring the eclipse degree but Taurus is also where Uranus is at 2°30′ and forms a wide t-square to the Sun and Moon at the time of the eclipse. The release point for all this pressure is quite often directly opposite, which would be 2°30 Scorpio.

Squares and oppositions are often thought to be difficult aspects, and as Aquarius, Leo, Taurus, and Scorpio are fixed signs, any change may be quite upsetting. If the natal or secondary progressed planets being squared are Venus or Jupiter, the changes or what comes to light may be more positive, although may not have a long life-span. Difficult aspects to Mars and Saturn may bring disgrace or ruin.

Those with natal or secondary progressed planets at  3° to 5° of Aries, Libra, Sagittarius, and Gemini may feel some impact of the eclipse, as these positions are sextile and trine the eclipse degree. Sextiles and trines are helpful and easy aspects so potentially any changes will be good ones.

Those with natal or secondary progressed planets at  3° to 5° of Virgo and Cancer may find that they feel some impact of the eclipse. These positions are quincunx the eclipse degree and quincunxes often ask us to make adjustments of some kind.

If you had a natal planet at 3°  to 5° of any sign, paying attention to when that planet crossed over your angles (Ascendant, Descendant, IC or MidHeaven) may bring significant news or events.

Mars opposite exact eclipse degree 9th July 2019 (at 4° from July 8 to 9, 2019)
Will be conjunct Mercury which will have stationed retrograde