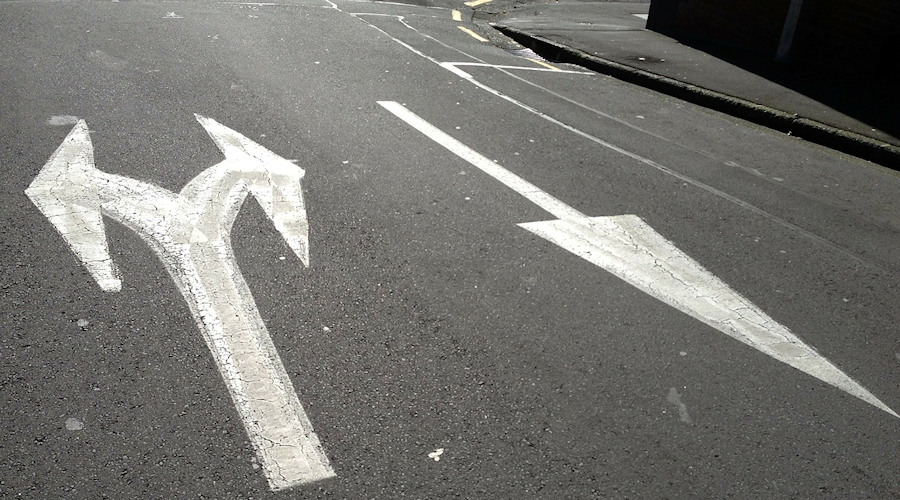 Planets are retrograde when from our perspective on Earth they look to be going backward. They are not actually going backward but the planet’s position in relation to the positions of the Sun and Earth means that sometimes they seem to be going in reverse motion.

If you look at the animation below you can see on the left that the Earth (blue dot) and Mars (red dot) are both in forward motion at all times. As we are looking at things from our perspective on Earth though, we see things more like the one the right. The loop in the diagram represents the retrograde motion of the planet. As this is a superior planet (Mars) the retrograde happens at the time of the opposition to the Sun.

There are two types of retrograde planets, the inferior and superior planets.

Mercury and Venus are both closer to the Sun than Earth and as such are called inferior planets. As they are so close to the Sun, we do not notice them in the sky unless they are at their most eastern or western elongation (distance from the Sun).

Just before reaching their eastern elongation, Mercury and Venus appear to slow down and will soon station (come to a stop) and reverse (retrograde) their direction. This is called the station retrograde.

About midway through the retrograde period, Mercury or Venus will have their inferior conjunction with the Sun. The planet will continue on toward its most western elongation and a short while before it reaches that it will start to station (slow down and stop) and appear to resume forward motion (direct). This is called the station direct.

How often and what to expect

When Mercury is retrograde there is a tendency for mix-ups and delays. This is a time when it is good to go over old ground, to review, re-edit, re-do, re-think,  and re-organize. It is a good time to process and go over what has happened in the previous 3 months.

When Venus is retrograde we are likely to be reviewing our relationships and values.

As the superior planets take longer to orbit the Sun than Earth, we eventually catch up and pass them about once a year. When this happens, the planet seems to slow down, stop and reverse its direction (station retrograde).

The Sun squares the superior planets when they reach the eastern and western quadrature.

It is about the time of the square from the Sun at the eastern quadrature that the Earth is catching up to the superior planet.

Not long after the square from the Sun at the eastern quadrature, the superior planet starts to slow down and stop and change its direction (station retrograde). This is because the Earth has caught up to and is passing the superior planet.

The Sun will later go on to trine the superior planet and it will slow down, stop and seem to change to direct motion (station direct). The square from the Sun at the western quadrature occurs not long after the station direct.

How often and what to expect

When Mars is transiting retrograde we are evaluating our power, drive, energy, and assertiveness.

When Jupiter is transiting retrograde we are reviewing our personal moral compass, particularly regarding the affairs of the natal house that Jupiter is retrograding in.

When Saturn is transiting retrograde we are re-evaluating authority figures, limits, and our role in society.

Uranus, Neptune, and Pluto have such slow orbits and are retrograde for such long periods that the effects tend to be felt on a collective level by all of society. The degree that the planet is moving backward and forward over may be a significant one in your natal chart and will have some significance there.

Retrograde Planets through The Houses

The house or houses that a planet retrogrades through can give some indication of what areas of life you may feel the effects of the retrograde planet phase.

Venus retrograde has an 8-year cycle to its retrograde phases and this means that there may be events from 8 years previous that are up for evaluation again. Venus retrograde periods tend to have us focused on our relationships and our values.

The superior planets  (Mars to Pluto) and their retrograde phases are slightly different and you can read more about that in this article. The planets Mars, Jupiter, and Saturn tend to be able to demonstrate more clearly what the retrograde period was about and the outcomes. The outer planets, because of their slower movements, may take a lot longer for the meaning of their retrograde periods to become apparent.

When the 1st house is experiencing a planet transiting retrograde through it, we tend to be focused on ourselves, as the first house is related to ourselves and ourselves only. This includes our physical appearance as well as our physical vitality or health. The 1st house is often said to be like a mask or our personality, in that it represents how others (particularly those that may not know us well) perceive us.

When the 2nd house is experiencing a planet transiting retrograde through it, issues related to our finances and possessions tend to be highlighted. This can include our income, as well as our attitudes towards money in general and our attachment to our possessions. This can be a good time to focus on not only the big financial picture (investments) but also on daily monetary transactions (checking change when shopping etc).

When the 3rd house is experiencing a planet transiting retrograde through it, issues related to our siblings, and those that we meet in our daily lives may be highlighted. The 3rd house is also related to early education, our local neighborhood, general correspondence, and communications.  Taking short trips, or traveling to places we undertake on a regular basis also fall under the 3rd house. Particularly in relation to Mercury retrograde, issues with computers, electronics, electrical equipment, and transport are likely when it is traveling through this house.

When the 7th house is experiencing a planet transiting retrograde through it can have us focusing on our relationships with our partners. This includes not just our romantic partners but our business partners as well. In fact, any one-on-one relationship that you are involved in may come under scrutiny during the retrograde phase.

When the 10th house is experiencing a planet transiting retrograde through it matters related to our career and public reputation may be under the spotlight. When a planet is retrograding through this house, you may experience more attention, as this is the most visible part of your natal chart. While the 10th is often related to our career, it also includes fame and notoriety.

When the 11th house is experiencing a planet transiting retrograde through it matters related to our friends are often experienced. Those that we know through groups and organizations that we belong to may also feature strongly at this time. Networking falls under the category of the 11th house, and our hopes and dreams are part of this house as well.

When the 12th house is experiencing a planet transiting retrograde through it matters related to our undoing may be apparent. The 12th house is related to places of confinement, which can include prisons, hospitals as well as monasteries and retreats. There may be a strong focus on psychological matters or addictions at the time that a planet is retrograding through this house.