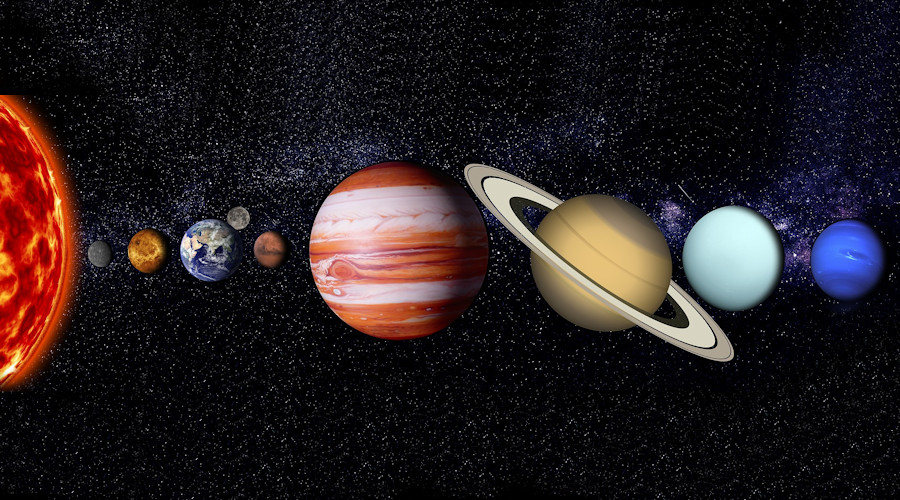 So, you’ve got a copy of your natal chart – and frankly, it means nothing to you. You are not alone, here below is a breakdown of what the planets mean in astrology along with the luminaries (Sun and Moon) and some important chart points.

Don’t have a copy of your natal chart yet? Get your free copy here. If you are interested in learning more about astrology in a relaxed atmosphere, why not join us over at the Scullywag Astrology Facebook Group.

When someone asks what your star sign is, they are really asking what your Sun sign is. The Sun represents you at your essential best. I have heard it described as the hero image you have of yourself.

The interaction (called aspects) that your Sun has with other planets in your natal chart will modify this to a certain extent. The Sun can represent the males in your life, particularly your father, father figure, or husband. The Sun stays in a sign for about 30 days. The Sun is the ruler of Leo.

The Moon is representative of our emotions. It is also related to motherhood and mothering (not just our children, but our relationships in general). It is how we nurture others, and how we go about getting our needs met. It is our instinctive responses. The Moon can represent the women in our lives, but our mother in particular. It can also be related to our health.

The Moon remains in a sign for about two and a half days (this is why if you are not sure of your time of birth, you may not know what sign your Moon is in). The Moon is the ruler of Cancer.

The planet Mercury represents communication, so named for the Roman god of shopkeepers, merchants, travelers, thieves, and tricksters. The sign that your Mercury is in will tell about how you think, how you learn, and how you express yourself. It is also related to how we move and dance etc. Mercury can indicate travel in a local sense, as opposed to Jupiter in a larger sense (further afield).

Your Mercury sign will never be more than one sign away from your Sun sign, as Mercury is never more than 28 degrees away from the Sun (each sign is 30 degrees). It remains in a sign for anything from 14 to 30 days. Mercury rules the signs Gemini and Virgo.

Venus is named after the Roman goddess of love and as such tells us about how we go about getting and receiving affection. However, it is also about our values; what we see as right and wrong. It is associated with an appreciation of beauty, art, harmony, and luxury. It is what we look for in our relationships and how we bond with others.

In a chart of someone that is attracted to women, it shows the qualities that they likely prefer in their romantic relationships. Venus contacts (aspects) to other planets in a chart can bring charm, beauty, and harmony to the other planet.

Venus stays in a sign for anything from 23 days to just over 2 months. It is never more than 47 degrees away from the Sun. Venus was traditionally known as the lesser benefic (considered lucky). Venus rules Taurus and Libra.

Mars is named after the Roman god of war and is about energy, pure and simple. This energy may be expressed in different ways, whether by physical hard labor, sporting prowess, ambition, libido, or anger.

It is considered in traditional astrology to be a malefic (bad or difficult planet). Having Mars interact with other planets in our chart can energize and incentivize that other planet or bring in aggression or rashness.

Mars stays in a sign for about a month and a half. Mars rules Aries (named after the Greek god of War) and before Pluto was discovered, it was the traditional ruler of Scorpio as well.

Jupiter, the largest planet in our solar system is associated with luck. Named after the Roman god Jupiter who was considered the father of the gods, this planet is associated with travel, expanding our horizons, study, and sometimes taking things to excess.

Jupiter is one of the social planets.  Jupiter stays in a sign for about a year, so people born during that year are likely to share the same sign in Jupiter and have similar outlooks in a very basic sense.

In traditional astrology, it was considered the greater benefic ( meaning it was very lucky, associated with bringing luck and gifts when making contact with a planet in your chart). Jupiter rules Sagittarius, and before Neptune was discovered, it was the traditional ruler of Pisces.

Another of the social planets, Saturn is a hard taskmaster and can drag things out. Saturn is associated with hard work and demanding trials. It is related to having to learn lessons before moving forward and being rewarded. It says stop!  Have you done your homework? If not – back to the books/lesson for you.

It is called the greater malefic in traditional astrology.  Associated with the Roman god Saturnus and the Greek god Cronus (who ate his own children) – there is no wheedling your way out of a Saturn transit.

In a relationship chart, it shows stability (no Saturn contacts mean no staying power) but can be rather sobering as well. Saturn stays in a sign for about two and a half years. Saturn rules Capricorn and before the discovery of Uranus, it was the traditional ruler of Aquarius.

Discovered in 1781, Uranus is the first of the generational planets.   Uranus is named after the Greek god Ouranos and relates to the unexpected, the unusual and shocking events. Uranus shakes things up and can be rather unsettling for many.

Uranus may show where we are different, where we feel a need to express our individuality and upset the status quo. Uranus stays in a sign for about 8 years. Uranus rules Aquarius.

Neptune is associated with the Roman god of the Sea and the Greek god Poseidon. Neptune is rather slippery and nebulous. It can be dreamy, glamorous, idealistic, but it can also be deceptive. It is like wading through a fog at times.  It is romantic but also prone to wearing rose-colored glasses.

Some see Neptune as being a higher octave of Venus when it comes to love relationships and can have spiritual overtones (although the very nature of it can make you prone to falling for false prophets or charlatans). When Neptune is in the picture, you need to ask yourself, “what am I not seeing?” Neptune stays in a sign for about 14 years and rules Pisces.

Pluto is associated with Hades, the Greek god of the Underworld, and the Roman god Pluto. It is about tearing down the old so that the new can be rebuilt, better, and more stable.

Pluto has a fearsome reputation as things often have to get to their lowest ebb before they can be rebuilt. It is like the phoenix from the flames. Pluto is associated with power plays, unearthing the hidden, sexuality, intensity, and crisis. Pluto stays in one sign for 14 to 30 years and rules Scorpio.

Chiron is a comet and was named for the centaur Chiron. Chiron is known as the wounded healer and represents where you have been hurt, but that hurt has allowed you to help and heal others.

The Nodes are not heavenly bodies but points that meet where the Sun and the Moons orbital paths cross. Often said to be quite karmic, and related to reincarnation, the North Node is said to represent what we should be working towards.

The house and sign that the North Node is in are said to give some indication of your purpose in this lifetime. In horary astrology, it represents a fated connection when it is in the same degree as one of the planets in a chart.

Your Ascendant is the sign on the horizon at the time and place of your birth. It represents how you are seen by others. It will have some effect on your appearance and is often referred to as the mask that you wear when with others. Whereas those that know you well will likely recognize your Sun sign traits, those that do not know you well may be seeing more your ascendant sign traits.

The ascendant sign changes approximately every two hours, and this is why knowing your time of birth is necessary if you are to find out your ascendant and what astrological houses your planets are in. The ascendant often (but not always) denotes the start of the 1st house.

It is also the shadow side. If we are not able to express a certain part of ourselves we may well be drawn to those that can and do express those energies for us. The Descendant denotes the start of the 7th house in many house systems and the sign on the 7th house cusp or the planets inside of it may represent those that we marry or partner with.

Your Medium Coeli refers to the highest part of your chart at the time and place of your birth. As such this is said to be the most visible part of your chart and shows how you are seen in a greater sense by the world at large. This is your public reputation, including fame or notoriety but also relates to your career or work as well.

Also called the Midheaven or shortened to MC, the Medium Coeli denotes the start of the 10th house in many astrological house systems.

Directly opposite the Medium Coeli is the Imum Coeli or the lowest point of your astrology chart. This area represents your inner sanctum; the most private part of your chart. It represents your home and family.

Interestingly enough it also represents our old age and in a horary chart (chart cast to answer a particular question) represents the end of the matter (the outcome). In many astrological house systems, it denotes the start of the 4th house.

The Vertex is said to represent fated connections. Like the nodes, the Vertex is a theoretical point and not a planet or literal object in the sky. Sometimes used in synastry (the comparison of two natal charts to see how compatible they are) it is said to indicate attraction and connection. It can also be used in transits or progressions (timing techniques) to see when you might meet someone that you have a special connection with.